Can sunscreen cause cancer? True or false 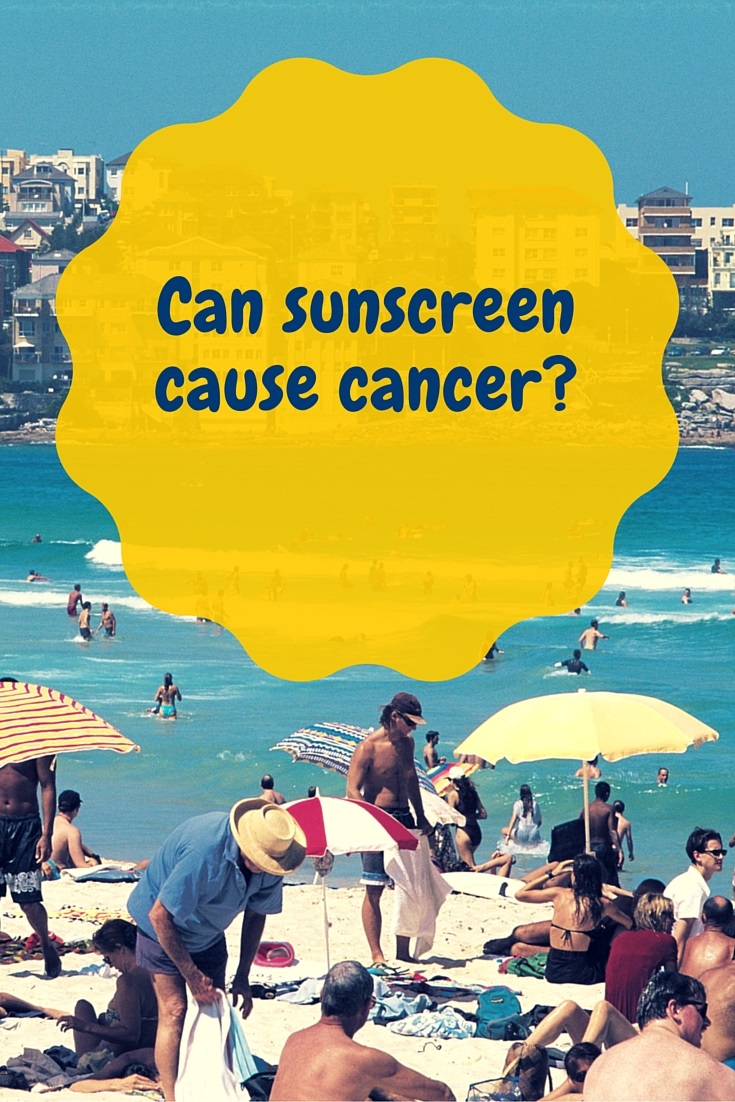 Erica June 14, 2016 0 Your body can sunscreen cause cancer, harmful ingredients in sunscreens, how does sunscreen work, what is SPF

Can sunscreen cause cancer? This question may be raised by those who wonder why skin cancer is more evident today despite the fact that so many sunscreens exist.  The answer to this question is important – if it is true, we would not want to take the risk of slathering our bodies with sunscreen. However, if it is false, it could prevent us from using the very products that help to protect us against the sun’s harmful rays.

Sunscreen use has increased but so has the rate of skin cancer. Does this mean that sunscreen causes skin cancer? This conclusion is far too simplistic!  Many other factors such as the thinning of the ozone layer, more skin-revealing clothing and the popularity of outdoor sports could be causing the increase in skin cancers.  Add to this the possibility that people may not be applying their sunscreen adequately or staying in the sun too long because they are relying on it too much.

Until the 1920s, the upper classes avoided exposure to the sun as much as possible, wearing hats and protective clothing. It was only when fashion and beauty magazines started promoting tanning as a sign of beauty and health that this changed. Perhaps we are afraid to spend too much time tanning today as we now know how dangerous it can be. However, most people still feel a need to go outdoors and grab a little sunshine as it gives us a sense of well being and helps our bodies to generate vitamin D.

How does a sunscreen work?

In 1944, Coppertone suntan cream was the first commercially mass-produced sunscreen in the U.S. The active component was zinc oxide, a physical barrier that sat on the surface of the skin and gave the wearer a pasty, white appearance.  Many developments have taken place in sunscreens since those days.

An ideal sunscreen would be able to completely block out UV rays. It would remain on the skin and remain stable when exposed to UV light. It would be easy to apply effectively in exactly the correct amount. All the ingredients used would be completely and unquestionably safe. A sunscreen with all of the above qualities simply does not exist, so we have to select one that we feel measures up best.

There are many different options for sunscreens today, and  formulations may use a combination of chemical and physical ingredients.

SPF stands for ‘sun protection factor’ and it indicates the ability of sunscreen to prevent UVB rays from causing skin damage. SPFs are rated on a scale of 2 – 50+ based on the amount of protection they provide. If it takes approximately 20 minutes for unprotected skin to start turning red, using an SPF 15 sunscreen is supposed to prevent reddening 15 times longer – about five hours. When looking at it as a percentage,  an SPF 30 filters out 97% of UVB rays.   An SPF of 50 blocks 1% more than this and thereafter the difference is less than a percent.

When the skin gets ‘red’ this shows your reaction to UVB rays alone and so you are unaware of the amount of UVA damage you may be getting. This is why a ‘broad spectrum’ sunscreen that protects against both types of rays is suggested.

UVA rays penetrate deeper into the body than UVB rays and although they do not cause sunburn, protection against them helps to defend the skin against photo-ageing (leathery skin, coarse wrinkles, and skin cancer.

Europe sets a high bar when it comes to UVA protection (stars ranging from 1-5 on sunscreens indicate the percentage of UVA radiation protection in comparison to UVB) and America still lags behind. European sunscreen makers have access to seven ingredients that filter UVA rays while Americans have access to only three. The most effective sunscreens are those that do not break down or degrade in sunlight and two ingredients used in European sunscreens have this stabilizing effect.

More than two million Americans are diagnosed with skin cancer every year, according to the Skin Cancer Foundation, and one in every five Americans will develop skin cancer in their lifetime. The FDA regulates sunscreens as over-the-counter-drugs and this makes their ingredient approval process slow and unwieldy. In 2014, President Obama signed the Sunscreen Innovation Act to speed up review of new ingredients which could improve American sunscreens.

The Environmental Working Group (EWG) puts out an annual guide to sunscreens and they have been voicing some concerns since 2007 when they put out their first guide.

One of the concerns is about misleading sky-high SPF values.  In 2011, the FDA determined that high SPF claims may be “inherently misleading ” but they have not yet capped SPF values.

Another concern the EWG has is about sprays – people do not realize what they might be inhaling and a spray makes it difficult to determine whether cover is thick and even. They caution people to avoid sprays until more data is available.

A big issue for the EWG is the fact that harmful ingredients in chemical sunscreens are absorbed by the skin.  One of the ingredients they are concerned about is retinyl palmitate. Retinyl palmitate is a topical form of Vitamin A used in many skin products. There have been studies done  on hairless mice of UV-catalyzed skin cancer potential of vitamin A ingredients. The European Scientific Committee on Consumer Safety reviewed the hairless mouse study and concluded that the NTP study “may indicate” that the ingredients are photocarcinogenic, but it is difficult to extrapolate this finding to risks of skin cancer for humans due to differences in skin sensitivity between hairless mice and humans (SCCS 2016).

Suncreen manafucturers rely heavily on an ingredient called oxybenzone that has received much negative press. In an article published on the Dr. Oz website, Dr Arthur Perry, MD, FACS says “endocrine disrupters, including oxybenzone, act like estrogen and can contribute to the development of breast and ovarian cancers in women and prostate cancer in men.”  He did admit that there was no research that proved his statements.

Dr. Daniel M. Siegel, MD, FAAD, president of the American Academy of Dermatology refutes his claims saying “Scientific evidence supports the benefits of sunscreen usage to minimize short- and long-term damage to the skin from UV radiation and outweighs any unproven claims of toxicity or human health hazard”.   He also says, “The FDA has several safety and effectiveness regulations in place that govern the manufacture and marketing of all sunscreen products, including safety data on its ingredients.”

A study cited by the EWG (Schlumpf et al, 2001) showed estrogenic effects on rats after ingestion of oxybenzone and the authors concluded that UV screens should be tested for endocrine activity, in view of possible long-term effects in humans and wildlife. However, the rats were exposed to large amounts (more than recommended for human use) via the mouth so this data cannot be used to refer to humans.

Another study done by Janjua et al, 2004 used 32 human volunteers and although they found that all three sunscreens tested were detectable in urine, reproductive hormones were unchanged.

In 2005  Hayden et al  did a study on sunscreens and skin penetration and concluded that “the human viable epidermal levels of sunscreens are too low to cause any significant toxicity to the underlying human keratinocytes.”

It appears that studies have not proved that oxybenzone penetrates the skin at the levels that are proved to cause damage. It does not appear to pose a significant risk to consumers, apart from contact allergic potential. There are also studies suggesting that parabens applied to the surface of the skin have no cumulative effects either – most ingredients are cleared from the body completely within 12 to 36 hours. 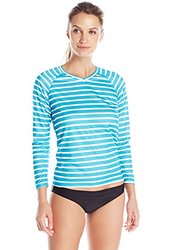 Many public health agencies are in agreement that sunscreens alone do not reduce the risk of cancer. Malignant melanoma is the fifth most common cancer in the U.K. and takes number one spot in the U.S. despite the use of sunscreens. Some studies have actually showed higher rates of melanomas in individuals who wore sunscreen to those who did not. The reason for this could be that people

who feel they are fully protected by sunscreen are likely to spend more time in the sun.

Dermatologists frequently remind us that there is no such thing as a safe suntan. Sunscreens do not offer complete protection and roasting in the sun for hours just because you have applied a sunscreen is unwise. This is where protective clothing can help considerably. The Kanu Surf Women’s Odyssey Long Sleeve UPF 50+ Rashguard shown on the left or the Coolibar UPF 50+ Women’s Convertible Swim Shirtshown on the right can prevent too much sun exposure and look good at the same time (click on image to purchase from Amazon or to view other protective swimsuits)

Some legitimate concerns have been raised about questionable ingredients in some sunscreens. However, if you avoid using a sunscreen altogether, you should not go out in the sun at all or be prepared to cover up completely from head to toe.  There is substantial evidence that skin exposure increases the risk of skin cancer and skin ageing.

The product you choose will largely depend on your own personal convictions – you may be uncomfortable using chemical products containing certain ingredients even though, according to the research done to date,  they do not appear to be absorbed by humans in anywhere close to the quantities that render them toxic. The only time you would need to worry is if you were pregnant, nursing or applying them to a child under two years of age.  You may prefer to use products containing only natural ingredients and the EWG suggests using zinc oxide as it is stable and protects against both UVB and UVA rays.

There are many different ways to protect our skin and the best way is to avoid direct sun exposure. However, that is a tall order, especially during summer. Because of that, using a sunscreen is essential.