Does exercise help your brain? 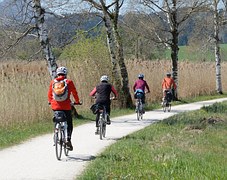 You know that exercise is good for your body but does exercise help your brain? You can see the results of exercise on your body. Your muscles are stronger and more toned. Few of us consider the benefits of exercise on our brains because we can’t physically see the improvement.

Many studies over the years have shown that physical exercise, especially aerobic exercise, has positive effects on brain function. Your brain is a tissue and, like any other tissue, it deteriorates with age. When you exercise, your blood begins to pump and this increases the flow of oxygen and glucose to the brain. The increased flow results in better brain performance.

My friends, who are mostly in their late 50s, have all taken up cycling.  They recently went on a 5-day trip through some mountain passes, riding about 50km a day. I feel as though they have already progressed way beyond the point where I can hope to catch up. However, I am seriously considering taking up cycling, even if I don’t join them on their mountain adventures.  I thought I would do some research into the effects of exercise on the brain to give me a little push in the right direction. 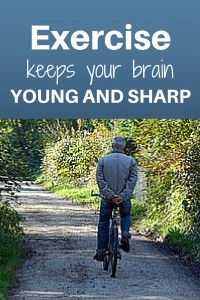 What does exercise do for your brain?

It was once thought that the human brain was incapable of growing new cells. In 1999 a Salk Institute study proved this to be wrong. Since then various studies have focused on trying to find out exactly how the brain forms new cells. What has been discovered is that physical activity can cause structural and functional changes in the brain.

A recent study published on 23 March 2016 in the journal Neurology, showed an association between exercise and people’s cognitive function.  Dr. Clinton Wright of the University of Miami Miller School of Medicine,  led the study of nearly 900 older adults. They were given standard attention, memory and other mental skills tests  and they repeated the tests five years later.  Of the group, 10% said that they regularly did moderate to high-intensity exercise.

What was discovered by the researchers was that those who had low levels of physical activity or who did not exercise at all, showed greater levels of cognitive decline over the five-year period.  The difference between the two groups was equivalent to ten years of aging.

A number of other studies have suggested that participation in physical activity delays onset of and reduces risk for Alzheimer disease (AD), Parkinson’s disease and Huntington’s disease and and can even slow down decline after degeneration has already begun.

One of the benefits of regular physical activity is the way it makes you feel.  When you exercise, your body releases chemicals called endorphins. These endorphins interact with the receptors in the brain, reducing your perception of pain. The also trigger a positive feeling, known as a “runner’s high” that people often describe as “euphoric”. They get addicted to the feeling. You usually feel good for a couple of hours after exercising and more positive about life as a whole.

Indirectly, exercise improves mood and sleep,  helping to reduce stress and anxiety. Problems in these areas frequently cause or contribute to cognitive impairment. Exercise lowers levels of cortisol, the stress hormone.

The amount of time you engage in physical activity may be important in helping improve glucose metabolism. Exercise is often found to improve insulin resistance in individuals, and also to prevent or delay the onset of diabetes. The effect of physical activity on blood glucose does vary, depending on how long you are active as well as a number of other factors. When you exercise, your insulin sensitivity is increased, so your cells are better able to use insulin to take up glucose.

Reduces risk of stroke and other small-vessel diseases

By improving the health of blood vessels, exercise can help stave off some forms of mental decline. For example, a certain form of dementia occurs when the blood supply to the brain is reduced due to diseased blood vessels.

What is the best body workout for the brain?

Overall, exercise increases brain health as much as it improves body health. Research suggests that it improves brain plasticity, function and resistance to neurodegenerative diseases. This is great motivation to get moving.  I will need to remember this when I climb onto my bicycle and start cycling up the first hill.