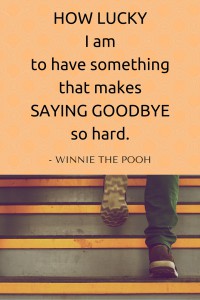 After a weekend of sewing curtains, packing and washing clothing, my daughter finally left for university once again after a three month holiday. An entourage of three cars set off, loaded with her possessions.  I have repeated this process for the past three years while she studied for her degree but saying goodbye never gets easier.

When we arrived at her little bachelor flat, I hung her curtains and unpacked her kitchen utensils, leaving her to unpack her clothes. As I drove back home, I experienced mixed feelings – I was glad she was installed in her little space and a step further along the road to becoming a psychologist.  However, I couldn’t avoid the sadness that was there too as I took that lonely drive back home.

I recently read a column written by Beverley Beckham for the Boston Globe. The fact that this article has been reprinted every year for the past nine years confirms that I am not the only one who struggles with these emotions when there children leave for  college.

“I was the sun and they were the planets”

Beckham says “I was the sun and they were the planets. And there was life on those planets, whirling, nonstop plans and parties and friends coming and going, and ideas and dreams and the phone ringing and doors slamming.” When her children left, her husband said, “they’ll be back”.  She says “And he was right. They came back. But he was wrong, too, because they came back for intervals, not for always, not planets anymore, making their predictable orbits, but unpredictable, like shooting stars.” She manages to capture the experience perfectly with this analogy. My daughter is an adult now. She is living her own life and she certainly is as unpredictable as a shooting star. Eventually she will become like a sun herself with her own little planets orbiting around her.

Another reason I loved her article was because she takes a number of platitudes commonly used in such a situation and shows why they do not really apply. “When one chapter ends, another begins” is one of them. She brings out the truth that eighteen years plus is not a chapter in any life. It’s more like a book and what follows is not just a continuation. I agree that the change that takes place when your children grow up and leave home is more like a sea change than a chapter change.

“When one door closes, another opens” is another saying that does not apply. She describes it beautifully by saying “Would that you could close a door and forget for even a minute your children and your love for them and your fear for them, too. Would that they occupied just a single room in your head. But they’re in every room in your head and in your heart.”

“There are two gifts we should give our children. One is roots, the other is wings.” is a quote I have seen many times on Pinterest. I thought it was  sweet but as Beckham says “However sweet it is, your children are not birds. Parents do not just let them go, build another nest and have another set of offspring in the next year.”

When she describes letting go of a child, she says “To let go of a child, a body changes, too. It sighs and it cries and it feels weightless and heavy at the same time.” This brought to mind a poem called Parting that I shared in another post. In this poem, the poet describes parting from a child as a second birth, more terrible than the first. The pain of the second birth comes as you let go of what you most want to hold.

Do all parents suffer tremendously when their nest empties? Barbara Torris, a retired educator turned blogger with a number of successful blogs, doesn’t think so – in fact she believes this can hold our children back from making their way in the world.  She says “Boomers going into a deep funk when their children grow up and leave the nest is something I have a hard time buying into.”

She is in her 70s and says that her generation rejoiced in their children’s opportunities. It was not a given that child would go to college or even have a job and be able to leave the nest. They did not take that for granted and neither did their children. She says that she doesn’t think her parents were unhappy when she went off to college and if they were, they did not tell her. She wonders why any mother or father would burden their child with the image of them pining away because the child has done exactly what they were reared to do…fly away? She says if the child were to be asked, she thinks they would tell their parents to grow up too.

I have to agree with some of her thoughts. We should be very happy for our children and the fact that they are becoming independent human beings. I am extremely grateful that my daughter has earned a merit bursary, enabling her to do her honors degree. I also totally agree that parents should never make it obvious to the child how much they are grieving. I only realized much later how much my parents missed me when I left for university. I was blissfully unaware at the time. It is wrong to cling to them in such a way that they feel guilty for leaving. I would never, ever, say to my daughter that I wish she was still at home. My grief is carried inside of me, not obvious for all to see but I cannot deny that it exists.

What do you think? I would love to hear your thoughts.