What is Candida and do I have it? 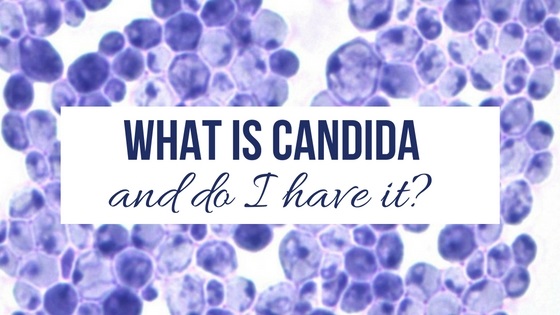 The term Candida is used to refer to the Candida Albicans fungus. It is a common yeast that exists in small colonies in your gut.  Do you have it? Yes you do. Everyone does. The idea that Candida does not belong in the body and you have to rid of it is not true. Candida has a function in the gut as it consumes debris. It prevents other harmful bugs from feeding on this debris and growing stronger. It is kept under control by the other microorganisms in the gut. When the healthy balance in the gut is disturbed, Candida can start taking over and that’s when it becomes a problem.

In the 1980s three books were written that did much to introduce the topic of Candida to the general public.   Dr. Orion Truss published his book The Missing Diagnosis with the idea that Candida overgrowth could trigger reactions that affected the whole body—even the brain. In 1983 Dr. William Crook’s  book The Yeast Connection  helped to popularize the idea and The Yeast Syndrome, by Dr. John Parks Trowbridge was also influential in spreading the concept.

The idea popularized in the 1980s was that once Candida overgrowth occurred in the gut, it leaked through the intestine wall into the bloodstream, causing a wide variety of symptoms such as bloating, allergies, fatigue, brain fog and muscle aches. In 1989 when I started suffering from a bewildering array of symptoms just like these, it was no wonder that Candida was suggested as a probable cause of my problems.

The  medical community at this time recognized Candida infections that were visible such as thrush and vaginitis. The idea of Candida spreading throughout the whole body and causing a multitude of health problems was unacceptable to most of them and they dismissed the idea as a ‘fad’.   One difficulty they had was that the symptoms were not just related to Candida and could apply to many different conditions. Another problem was that there were no diagnostic tests for the condition.

Since the 1980s, an entire industry has developed, focused on providing help for those who believe that they are suffering from what is called by many different names – “Candida overgrowth syndrome (COS)”, “Candida Related-Complex” or “Candidiasis”.  Some medical doctors now believe that  the effects of Candida overgrowth can be systemic although the infection itself is not. They agree that  toxins produced by Candida overgrowth can be  absorbed into the blood stream and reach all parts of the body.  However, many MDs still do not acknowledge that Candidiasis exists.

What is being revealed in current studies is that there is more to what goes on in our gut than we realize. Research is showing that an imbalance in the gut (dysbiosis) can contribute towards a wide range of health problems. Many researchers believe that studying what takes place in the gut can provide us with many answers to disease.  Understanding more about how to develop and maintain the balance in the gut may lead to changes in the way we manage our health and even prevent some diseases from developing.

What triggers a Candida problem?

Any situation in which the healthy balance of bacteria in the gut is disturbed can allow fungus and certain bacteria to take over. Some of the triggers are:

How can I find out whether I have a Candida problem?

Before useful laboratory tests existed, diagnosis depended upon taking a medical history, checking out risk factors such as antibiotic use and filling out questionnaires or symptom checklists. Today there are other ways of diagnosing Candidiasis but an assessment by a doctor can still help as a way of establishing how likely it is that you have Candida overgrowth and whether laboratory tests are necessary.

According to the National Candida Center, self-testing can give you some idea as to whether you may need further testing. They suggest the following tests:

Self-testing is not adequate on its own for a proper diagnosis and these tests are hardly scientific. They can perhaps indicate a possibility of the existence of Candida overgrowth but that is all.

In the 1980s when the concept of Candidiasis became popular, it was not possible to go for reliable laboratory tests to determine whether you had it or not. This is not the case any longer and various tests can be conducted:

A comprehensive test where samples of stools are taken for several days will give a good idea of what’s going on in your gut. It will uncover bacterial, fungal and parasitic overgrowth in the gut as well as levels of good bacteria.

A Urine Organix Dysbiosis Test determines the level of  D-Arabinitol. This is a waste product of Candida and high levels indicate Candida overgrowth.

A Candida Immune Complexes test or Anti-Candida Antibodies test can be done where the blood is examined for specific antibodies related to Candida overgrowth.  If antibody levels are high, there is a strong likelihood that Candida overgrowth is present and your body is reacting to it.

You can find out more about specific tests here.

How to beat the Candida problem

There are hundreds of options for treatment of Candidiasis – diets, prescription drugs, and all kinds of natural antifungals and probiotics. One of the major difficulties when treating the problem is to choose what will be effective for you. There is no common consensus on the perfect treatment.  There is consensus, however, on the fact the approach needs to be multi-faceted.  The Candida overgrowth has to be dealt with,  friendly bacteria restored to help keep it in check and a healthy balance maintained in the gut to prevent re-occurrence.

The idea of an anti-Candida diet is to exclude sugar in all of its forms so as to starve the Candida, causing it to die off.   For this reason the diet normally includes a long list of foods to avoid. Fruit, sugar, grains , alcohol, dairy, starchy vegetables, dairy products, coffee and even carbohydrates that are not easy to digest are excluded.

A diet based on non-starchy vegetables, high-quality proteins and gluten-free grains such as millet and brown rice is usually suggested.  Avoiding fruit  is also commonly recommended although many believe that sticking to low fructose fruit such as lime, grapefruit and lemon is better. They see no reason to eliminate all fruit from the diet and feel that it can be counterproductive because of all its benefits.

The very low-carb aspect of most anti-candida diets has also come under fire. One problem mentioned is that very low-carb diets lead to ketone production and studies show that neutrophils (white blood cells) are not as capable of killing Candida when ketones are present. Another area of debate is whether or not healthy fats should be included.

As long as you follow a diet that excludes sugar and starch, you will be going a long way towards making it easier to kill Candida overgrowth.

Antifungals help to kill off Candida overgrowth. You can make some progress with diet, but you also need to use an antifungal.  Antifungals should not be taken for too long or they start killing off all the beneficial yeast in the body that protects against bacterial overgrowth. Resistance is also a problem and researchers to starting looking for alternatives to conventional antifungals.

You may prefer to use natural antifungals because no prescription is required and they are readily available. They are generally considered to have fewer side effects and some of them are very effective.  It’s probably worthwhile attempting a natural approach first to see if it works for you.

Some natural antifungals are:

Before using antifungals, even natural ones, it is important to check with your health practitioner whether it’s advisable. Certain prescription medicines and chronic conditions preclude using some antifungals.

Diflucan and Nystatin are two common prescription antifungals. Nystatin was the first widely used antifungal and it is effective against Candida without killing off other beneficial bacteria.

Probiotics are used to re-introduce healthy bacteria into the gut. The healthy bacteria form colonies that prevent the Candida from getting out of control, regulate the acidity in the stomach and help to boost the immune system.  There are thousands of commercial probiotics to choose from. Some of the considerations when choosing one is how many billions of bacteria are found in a capsule, how many strains it contains and which ones they are (Lactobacillus Acidophilus is a popular strain). One that is recommended is the Healthy Origins Probiotic  which is a blend of eight friendly bacteria strains and it’s resistant to stomach acid. Prescript Assist, a soil-based probiotic. is another good choice.

Probiotics usually come in supplement form but there are some foods that act as probiotics. Fermented foods like kefir and sauerkraut contain lots of ‘good bacteria’. One of the most popular probiotic foods is live cultured yoghurt.

What else can you do?

You can try to avoid other pre-disposing factors as far as possible. Don’t take antibiotics, steroids, or hormones unless absolutely medically necessary. Candidiasis is difficult to diagnose and confusing to treat. Even if you are diagnosed with Candida and diagnostic lab tests show a current Candida infection, it is not a straight forward issue like finding out that you have a broken limb and putting it in a cast. My conclusion is that the only real way to know if Candida is causing your symptoms is to follow a course of treatment. If your symptoms improve, they were most likely to have been caused by the Candida.