When are you considered old? 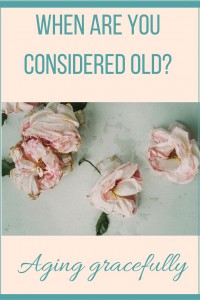 In 1933 a self-help book called Life Begins at Forty by Walter Pitkin was a bestselling book in the United States. However, our perceptions about old age have changed since then as life expectancy has increased by leaps and bounds. Today, many people still experience excellent health throughout their sixties. Their finances are often in better shape too, as their children are now adults and no longer need support. For many people, their 60s are the start of a whole new chapter in their lives. They are often found traveling the world, opening businesses, taking up new hobbies and leading active and exciting lifestyles. So, when are you considered old today?

Many people retire at the age of 65,  so that is often thought of as the start of old age.  However, in a poll conducted in Britain, researchers found that the average age the Brits thought was ‘officially old’ was 68 or over. They found that most 60-somethings did not feel their true age. Of course, the definition of old age also varies according to age groups. As a teenager, I used to think of someone in their 50s as being past it. I am rapidly approaching 60 now and there’s a lot of life left in me yet!  In America, similar results were found in research conducted by the Pew Research Center. Those aged 18 to 29 taking part in their survey believed that the average person becomes old at age 60, whereas those aged 65 and above felt that people were old at 74. All things considered, it appears that the title of ‘old’ is fairly difficult to pin down.

You’re only as old as you feel

We often use the expression “you are only as old as you feel”.  Most of us know a 20-year old who acts more like a 40-year old and a 60-year old who acts like a 30-year old. My mother of 82 is still very active for her age,  and has a better social life than I do. She lives in a retirement village and I am always intrigued to see two people of the same age approaching life very differently.  Some appear to ‘give up’ in their 80s and merely exist until they die. However, one of my mother’s friends is 92 and still has a great appetite for life. She is younger in spirit than many of the others who are still in their early 80s. My own grandmother lived an active, fruitful life until the age of 97. At the age of about 84 I remember her saying “the old ladies love it when I play the piano for them”. I can’t help admiring older people who attempt to do what is not considered acceptable at their age, such as the old lady who went sky-diving on her 80th birthday.

Aging does have its downsides

However,  we do have to face the fact that changes occur with age – biological, psychological, and social. Memory loss, serious illness, becoming sexually inactive, turning gray, poor bladder control,  and no longer being able to drive are just some of the problems that may have to be faced with aging.  The effect of losing a life partner or facing a serious illness cannot be underestimated and such events are more likely to occur in your sixties than in your forties. However, difficult circumstances are not the prerogative of those who are getting old – there are difficulties to overcome at every age and stage of life.

Do these tests of aging

Try this fun test to find out how old you are in terms of your reactions. I evidently have the reactions of an 84-year old. I better not go sky-diving anytime soon!

Did you know that your heart age can be older than your actual age? I did this heart test online and found out that my heart was ten years older than my actual age – time to reduce the weight and step up the exercise! I know that about 45 minutes of aerobic exercise, three to four times a week is enough to keep my heart young. However, knowing it is one thing and having enough motivation to stick to it is another.

How old you look in pictures

If you’ve ever wondered how old you look in pictures, how-old.net takes data from an image you upload and uses it to determine your age and gender.

The older some people get, the younger they feel. Ask a person of 65 how old they feel and many say that they feel about 10 years younger than their actual age. Of course, there are always times when you feel your age – your bones creak, your joints aren’t quite what they used to be and you can’t stay up late at night anymore and not pay for it the next day.  However, your predominant mindset is positive and you still look forward to what the future holds.

Giving your body what it needs to age well is not rocket science – eat healthily, get enough sleep, exercise, don’t smoke and drink in moderation. Many of you are fairly well educated today as to what you should be doing to keep your bodies healthy.

I would love to hear your comments on how old you feel is ‘old’ in today’s world.