Many of us have been introduced to the health benefits of pomegranates. However, it is only recently that a study has revealed the anti-aging potential of this superfruit. Modern scientists have managed to prove what ancient physicians believed – that the pomegranate can help us to fight aging.

The pomegranate, with its jewel-like seeds, has been a symbol of life, fertility and vitality through the centuries. It was one of the earliest fruits to be cultivated and has been written about in Greek myths, Shakespeare’s plays and the Bible. Part of the reason why it became so significant symbolically was probably because it was used successfully to treat a wide range of illnesses through the centuries.  Now, thanks to a team of scientists from the Swiss Federal Institute of Technology in Lausanne, some of the beliefs about the benefits of the pomegranate have been proved scientifically.

As we age, our cells struggle to recycle mitochondria (the powerhouses of the cell). Their build-up affects the health of many tissues, causing muscle weakening, and possibly causing diseases that come with aging, like Parkinson’s. Within the humble pomegranate lies an answer to this problem.  Our intestinal bacteria convert natural substances called ellagitannins found in the pomegranate into a molecule called Urolithin A. Urolithin A drives the process that allows the parts of the cell that become defective to be cleared away.

The scientists doing the recent study conducted tests on the nematode C. elegans. This worm is often used in such tests because it ages rapidly. Its lifespan increased by more than 45% when exposed to Urolithin A, a truly amazing result.  Rodents were tested too and it was found that the older ones showed 42% better endurance while running than those in the control group – another significant result.

He says “species that are evolutionarily quite distant, such as C elegans and the rat, react to the same substance in the same way. That’s a good indication that we’re touching here on an essential mechanism in living organisms.”

The amount of Urolithin A produced does vary widely depending upon factors such as the flora present in the gut. For some people, no matter how many pomegranates they eat, they don’t produce Urolithin A because they do not have the right microbes in their gut. However, the scientists are already working on a solution to this, and  start-up company, Amazentis, is currently conducting clinical trials on humans. They have developed a way of delivering calibrated doses of Urolithin A. 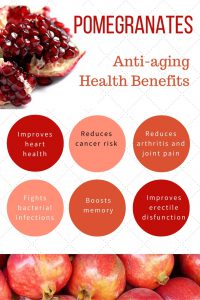 The value of antioxidants is common knowledge.  We are aware that they slow the aging process, protect our health in many ways  and reduce the risk of numerous diseases.  How does pomegranate juice compare with other beverages that are heavily promoted as being rich in antioxidants?  In a UCLA study comparing different polyphenol-rich beverages, pomegranate juice came out tops. It beat out grape juice, blueberry juice, cranberry juice, red wine, iced green tea and other well known sources of antioxidants. The main reason was because it contained the most of every type of antioxidant.

Ways to add pomegranates to your diet

Fresh – enjoy fresh pomegranates when they are in season – it’s easy enough to remove the edible arils by cutting around the diameter, splitting it in two and then pounding the back with a large spoon. You can even store arils in the freezer to get the health benefits of pomegranate all year round.

Use the arils as a topping for granola or add to red wine based sauces.  Pomegranate gives a Pomegranate and Cucumber Salad a juicy kick. 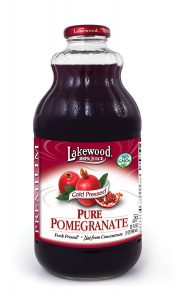 Pomegranate Juice – when drinking a juice make sure it contains no additives like sugar, other juices as fillers or taste enhancers – it should just be pure pomegranate juice.  A pure juice is obviously going to be more expensive but at least you know  that you are getting the full benefit of its antioxidants.  It is  important to realize that the juice does contain a high amount of natural sugar. Lakewood Pure Pomegranate Juice can be found on Amazon (A pack of 6 32oz bottles).  As you should do with any herbal or dietary supplement, you should talk to your doctor before adding pomegranate juice as a regular supplement to your diet. It can interact with certain prescription medications.

With recent studies, a host of new possibilities have opened up in the fight against muscular degeneration and other health problems that develop as we age. An old age free of some of the health problems we normally associate with aging is an exciting thought.  We don’t just want longevity – we want to have quality of life for longer – and maybe that dream is not so elusive after all.