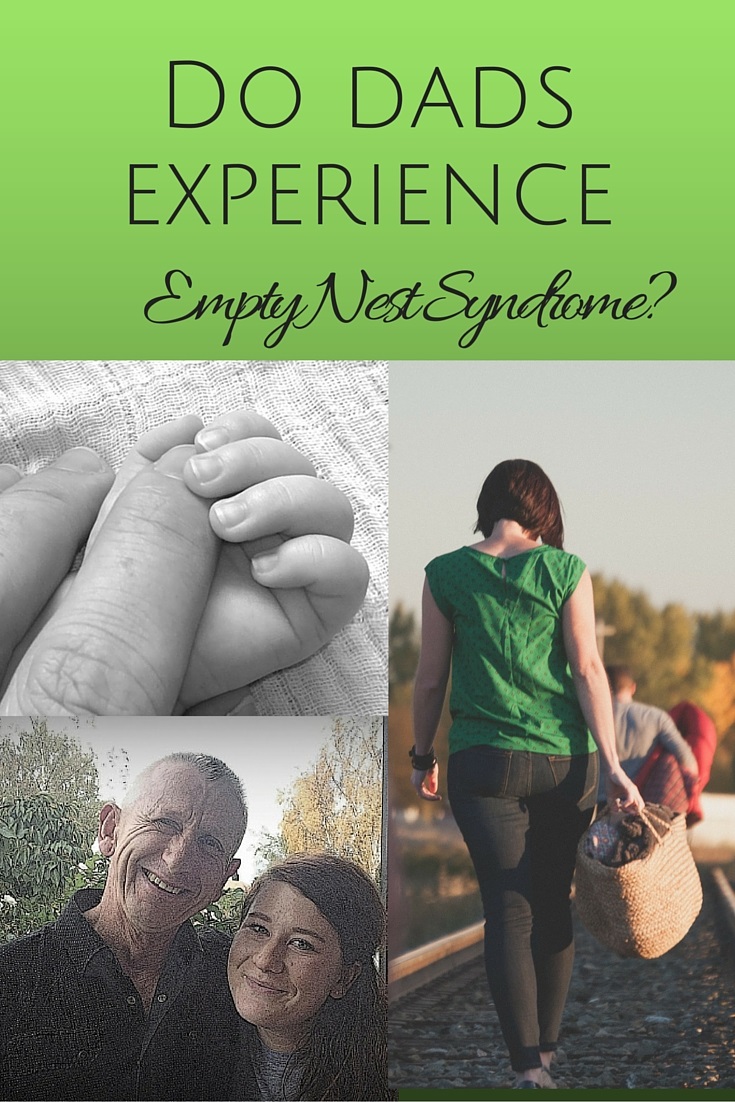 In his book, Love Life, Rob Lowe expresses what he felt when his sons left the nest. He says “I’m trying to remember when I felt like this before. Like an el­ephant is sitting on my chest, like my throat is so tight and constricted that I can feel its tendons, like my eyes are 100 percent water, spilling out at will, down pathways on my face that have been dry for as long as I can think of. I’m trying to remember: When was the last time my heart was breaking?”

For many men, it is still socially taboo to express their feelings. They don’t give voice to their sadness and find it hard to open up. They will often do the macho thing and make statements like  “Thank God the kids have finally left home. Now we can get on with our lives”.

The fact is that an empty nest may be harder on fathers than conventional wisdom suggests.  The departure of their children is an emotional experience for many fathers and it’s still mostly unacknowledged.

Fathers are far more hands-on than they were in the past.  They are doing more household chores and spending more time with their children. According to a Pew Research Center analysis,  fathers have nearly tripled the time they spend with their children since 1965.  They are no longer the sole earners in the household with many more women holding down full-time jobs. The number of stay-at-home fathers has increased and many men admit that they would stay at home if they could afford it. They are now seeing themselves as far more than just financial providers and want to be as involved as possible in all the activities of their children’s lives.

Stay-at-home dads are often devastated when their children leave the nest.  Michael, a stay-at-home dad says “Suddenly I no longer had to ferry children to activities, make them food and and listen to what had happened that day at school.  The worst time for me was the late afternoon and early evening when we usually spent time together: that was when I missed them most.”

When reading the poem ‘Walking Away’ by Cecil Day-Lewis, Great Britain’s Poet Laureate from 1968 until his death, one realizes that the pain of letting go of a child is pretty much a universal language. It is not restricted to one gender or one generation. This poem was written in 1956 about Sean, Day-Lewis’ son.

It is eighteen years ago, almost to the day –

Your first game of football, then, like a satellite

Wrenched from its orbit, go drifting away

Behind a scatter of boys. I can see

You walking away from me towards the school

With the pathos of a half-fledged thing set free

Into a wilderness, the gait of one

Who finds no path where the path should be.

That hesitant figure, eddying away

Like a winged seed loosened from its parent stem,

Has something I never quite grasp to convey

About nature’s give-and-take – the small, the scorching

I have had worse partings, but none that so

Gnaws at my mind still. Perhaps it is roughly

How selfhood begins with a walking away,

And love is proved in the letting go.

My daughter’s friend says she had expected her mother to miss her the most when she left home – she was taken aback that her dad found it so difficult. He didn’t want her to know how much he was suffering but she couldn’t help noticing his anguish. He would make excuses to go and visit her at college and she never had the heart to tell him that she found it embarrassing to have him hanging around.

Helen M. DeVries, PhD, an associate professor of psychology who has done some research on empty nesting  says  “Everything said the empty nest is supposed to be this terrible loss and terrible transition for women. I started wondering if I was just unusual and my friends were all unusual because we just weren’t seeing our children leaving home as a terrible thing.” According to her research, it is actually men who are more likely to have a hard time when their children leave home.

In the sample she studied, the men did not talk at all about preparing for the next phase because they did not see their children leaving home as a major transition. This meant that they were caught by surprise by their feelings. They were more affected than their wives who had planned, prepared and communicated about the empty nest phase. She found that many fathers had regrets about not spending enough time with their children before they left home.

Dads should be able to talk about how they feel when their children leave home. We need to acknowledge that they too suffer from empty nest syndrome – sometimes even more than women. They may just respond rather differently to women.  Women going through empty nesting and menopause at the same time often find it harder to cope with an empty nest. For men it often comes at the same time as a general ‘mid-life crisis’ when they are already reevaluating their lives.

Men have every right to feel some emotion when their children leave home and should not feel ashamed about expressing it and even getting some help if they find it difficult to adjust.