For the love of honey

Erica May 4, 2016 0 Your body honey and healing, honey and religion, honey hunters 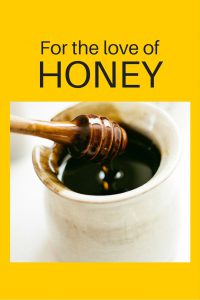 My interest in honey was piqued recently when friends presented me with some of the honey from their hive. It was still in the comb and the light, clear, floral taste was 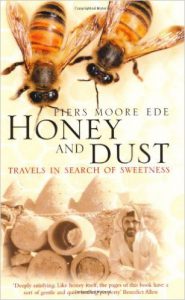 different to any other honey I had ever tasted.

It made me want to find out more about honey and I started reading a book called Honey and Dust  by Piers Moore Ede. Ede goes to Italy to heal after being seriously injured in a hit-and-run accident.  He stays on an organic farm with a beekeeper called Gunther who introduces him to the magic of beekeeping. Gunther says “You know man was eating honey thirty thousand years before he was cooking his food. …. and think about all those countries in the world, all the different plants that grow there, and the taste of some of that honey … I would like to taste them all.”

Ede, depressed since his accident and battling to find his feet in the world again, takes hold of this idea. It materializes into journeys to various countries like Lebanon, Syria and Nepal on a quest to seek out the best honeys in the world. He gives us a tantalizing vision of the lengths to which humans would go for the love of honey and its sweet taste on the tongue.

Ede’s book won the D.H. Lawrence prize for non-fiction in 2007. Some of the facts that follow were gleaned from Ede’s book and others come from my own research.

More than just a food

Man isn’t the only honey-lover

Honey is not only prized by man. Other creatures like bears, honey badgers, mountain gorillas and many more are drawn to its sweet taste. Primates are expert honey thieves. In 1969, a man named Deschodt described an incident near Lake Victoria in Africa. He saw a group of twenty chimpanzees enjoying the fruits of a honey hunt. The chief male was pulling honeycombs from a crevice in the cliff and tossing them down to the others who were jumping up and down and screaming, either from pain at being stung, delight, or a mixture of both.

The body in the jar

Straight from the hive, honey is thin and liquid but over time its molecular structure changes and the honey granulates. Within granulated honey, the particles lie closely together and the fact that the substance is naturally acidic (a special enzyme helps break nectar down into gluconic acid and hydrogen peroxide) and low in moisture means that bacteria are unable to multiply.  That is why it is so useful as an embalming and preservative agent.

A story is told about grave robbers who looted a tomb near the Pyramids. They came upon a sealed jar, broke it open and began to eat the honey inside. One of the men soon noticed that there was hair mixed in with the honey. They peered into the jar and saw that it contained the body of a child, still in a good state of preservation.

Valley of the Skulls

In the Baruk mountain forests of Lebanon, specialist honey collectors would harvest honey from colonies nesting in fissures of rocks. They were let down from the top of the rocks by a rope, latterly wearing a metal gauze face mask, held in position by the customary head cloth, and with socks protecting their hands. The smoker consisted of glowing charcoal on a flat piece of tin, and the smoke produced was directed by blowing. If the entrance to the nest was too small, the man enlarged it by using a charge of dynamite. When his bucket was filled with honeycombs it was raised to the top by the rope, leaving the honey collector without any safety line and, on several occasions, mass attacks by bees from a harvested nest resulted in his falling to his death on the rocks below. One of the places where the nests were found is named Sannine or ‘valley of the skulls.’

A species under threat

Bees are a species very much under threat, as is the ecosystem in which they play an integral part. The environment depends on the pollination that occurs when honey bees gather nectar. The varroa mite (Varroa jacobsoni) is a tiny arachnid (a cousin of the spider)  that attacks adult bees and their developing larvae, or brood. It causes decreased brood, deformed bees, and generally weakens the entire colony. The mite can spread quickly to other bee colonies by traveling with swarms or migrating drones, and by the movement of infested equipment. It is not harmful to humans or livestock.

“If the bee disappears from the surface of the earth, man would have no more than four years to live”
~ Albert Einstein

It all begins with nectar 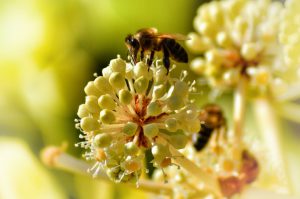 The sweet, sticky substance produced by flowers is sucked up by bees and stored in a ‘honey sac’ – essentially a second stomach. Back in the hive, the bees masticate the nectar (releasing enzymes from their salivary glands to change the complex sugars to simple ones) and the nectar becomes honey. It is then expelled into the honeycomb in a semi-liquid condition. For the honey to last, the liquid content needs to be lowered and so the bees flap their wings very fast, creating a warm flow of air against the honeycomb. (Nectar is about 30-90% water and honey contains about 17%). When enough water has evaporated, the worker bees seal up the cells with wax caps.

Think about that one the next time you put a teaspoon of honey in your tea!

The flavor and color of honey

The flavor and color of honey depends on the source of the nectar.  Clover produces honey with the lightest color and mildest flavor. Buckwheat honey is the darkest in color and tastes strong and spicy.  Eucalyptus honey has a menthol flavor.

Wild Himalayan bees may produce honey so toxic it can have a man vomiting his guts out or even falling unconscious. This is because the nectar comes from rhododendrons that contain poison. Acute cases of poisoning cause cardiovascular problems with very low blood pressure and slow pulse rate.

Today, in a world full of fizzy drinks, ice-cream, cakes and candy bars, sugar is not in short supply.  However, eating sugar does not seem such a great idea any more as consequences of its consumption become more and more apparent. People are choosing to use honey instead of sugar, consumption is increasing and so the demand for quality honey grows too.  Honey is full of nutrients –  protein, fiber, water, sugars and various vitamins and minerals. It contains sodium, iron, phosphorus, potassium, calcium and zinc. The vitamins it contains include Vitamin BC, Vitamin C, niacin, folate and riboflavin.

I can attest too, to the exquisite taste of raw honey, thanks to the gift from my friends. It has become clear to me why humans used to risk their lives to find wild honey.

Below is a link to the lowest priced bulk raw honey (5 gallons) on Amazon.