A rare green albino turtle was recently found on the Sunshine Coast in Australia. Volunteers thought the nest was empty but when they examined it, they were surprised to find a tiny white hatchling. Members of a local environmental volunteer group had already counted 122 broken eggs, so its siblings had already made it into the ocean. The volunteer group’s president, L. Warneminde, said. “It looked like a normal turtle hatchling, except that it had a white shell and it had little white flippers, and you could see a little bit of pink under its flippers. None of us had ever experienced or seen anything like that before, so we were all a little bit taken aback.” With its coloring, this little one is extremely vulnerable. It has a very slim chance of surviving the dangerous journey ahead of it across the Pacific ocean. In parenting adult children, we may often feel that they are just as vulnerable as this little hatchling and fear the obstacles they might have to encounter on their journey.

So, how vulnerable are our adult children? 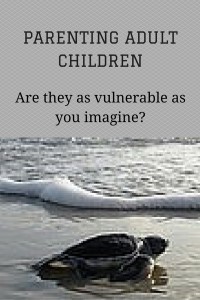 When our children leave the nest and go out into the world, we may wonder how they will ever make it in the big, wide world and want to save them from all the dangers. Fortunately, they are usually tougher than we imagine. They may start out on shaky legs and stumble over a few obstacles but they become stronger and more confident as they move along.

Some of them face the future with confidence, tackling each challenge with enthusiasm as it arises. Like those healthy little green turtles, they rush towards the ocean of life, get buffeted about a little but quickly learn to ride the currents. My daughter Caitlin was one of these, thriving on challenge and forging her way over all obstacles to achieve her goals.

Some of our children cause more concern. Like the tiny albino turtle, they may be facing greater odds than the others. Perhaps they have disabilities or learning difficulties. My son, Matthew, was diagnosed with ADD at a young age. His IQ tests were all over the place with seriously high scores in some areas and really low ones in others. The school-readiness psychologist said that if he managed to find his niche, he would rise to the top, despite his difficulties.

He started studying engineering when he left school and said he was so miserable he prayed every day that another opportunity would open up for him. When I looked at his lecture notes, all I saw were pages of doodles. The lecture hall was enormous and with so many students, I can imagine how he battled to focus. He left after six months and began doing a Computer Science Degree through a private college. He has never looked back and now works for a prestigious company as a developer. He has found an environment where his deficiencies are far outweighed by his strengths.

For children with problems, finding their way once they leave home can be daunting. However, the power of the human spirit cannot be underestimated. It is often those who have to overcome difficulties and fight the hardest that develop great inner strength.

One of the biggest problems that adult children face when they go out into the world is that of  comparing themselves with others. My daughter, Caitlin came home for the weekend recently. It didn’t take me long to realize that she was battling this year because she had fallen into ‘the comparison trap’. Her honors group consists of 35 students, all very driven and passionate about their choice of career. She has been told repeatedly since she started studying that the competition to get into the master’s program is fierce. She worked hard as an undergraduate and graduated cum laude. Now, she is faced with the reality that all the other students doing honors have the same ambition as her – to become a clinical psychologist. She has always been at the top of the pile and now she is with others who are just as capable, intelligent and often more experienced than her.

Competitiveness is an established part of the whole educational process, whether we like it or not. Competition can be healthy in some instances but it can also be extremely toxic.  Matthew Cretzinger discusses academic competition between graduate students in his thesis and how it can cause students to use alternative methods to cope, even dishonesty. The way children react to competition is different too, depending on their personalities, genes, skills and experience. Two children from the same family may react completely differently, with one loving the surges of adrenaline and flying through tests, while the other one is completely incapacitated by the same experience, feeling insecure and inferior.

The following statement was made by Brian, a first year medical student ‘I try to not let it get to me, but I don’t know how much more I can take. And I’m not even a 3rd year yet. My classmates are so competitive I don’t know how to deal with it. How do you deal with it? I try to stay away from them, but the competitiveness still gets to me. I swear, it’s like every man for himself in med school.’

I felt sad when I heard this and I believe we need to educate our children into realizing that their peers are not their enemies. They need to focus on learning for its own sake and see fellow students as future colleagues rather than people they need to beat to achieve their goals.  We need to instill in them the mindset that they are creators rather than competitors. With this mindset and a strong sense of self,  they will avoid unfavorable comparisons with others and be far less vulnerable.

Watching baby turtles climb out of the nest and head towards the ocean is an emotional experience for those who witness it.  They face predators like birds and even crabs and pieces of driftwood can be obstacles to their progress. Everyone watching gasps a sigh of relief when they make it into the water, and that is only really the start of their dangerous journey. Experts say that only one out of every thousand survives to adulthood and for the little albino turtle the odds are much higher.

Our children are faced with many challenges too when they leave the nest, although their odds of survival are certainly higher than baby turtles!  Clinging on to them because of our fears for them is destructive. We have to let them go and realize they are not as vulnerable as we imagine. In fact, many of them flourish and for those who battle, we are always there to give them help and encouragement along the way.

Here are some books that will help you if you are struggling to relate to your adult child: