How to downsize your home: 20 helpful tips

Erica March 13, 2016 0 Your home downsizing your home, tips for downsizing 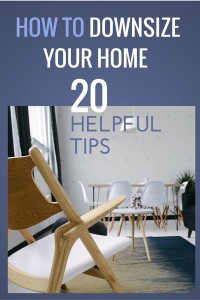 When you have finally made the decision to downsize your home, it may be daunting to face the prospect of preparing for the move. Some couples have accumulated possessions over many years and they do not know where to begin. It is often difficult to part with items, even though they may no longer serve any useful purpose.

Psychologically, this process can be tough. It is hard to leave the home which holds so many memories and in which your children grew up. Some people are so attached to their homes for sentimental reasons that they simply refuse to move. This can put a great deal of stress on their children later on when their parents are becoming frail. People who proactively make the decision to downsize, often wonder why they waited so long. There are many advantages to be experienced when living in a smaller home.

It does require a shift in attitude and that is why I think it is so important to have the right mindset when contemplating such a move. END_OF_DOCUMENT_TOKEN_TO_BE_REPLACED

Thinking of downsizing your home? Ask yourself these questions

Erica February 8, 2016 6 Your home downsizing your home, help with making a decision to downsize, thinking about downsizing? Questions to ask

When facing a decision about downsizing your home, there are two most important questions to ask. Will it improve your finances? Will it improve your lifestyle? If you answer is ‘yes’ to both of these questions, you need to make the decision sooner rather than later. Don’t stay in your large family home until your children have to drag you out.

There is no set age to downsize – some empty nesters choose to downsize in their 50s. Others prefer to stay on in their family homes until they feel it’s time to move into a retirement community.  Some couples take a few steps, from family home to smaller home, condo or apartment, before eventually settling in a retirement community. There is no right way or wrong way to downsize – it’s what’s best for all concerned that matters. END_OF_DOCUMENT_TOKEN_TO_BE_REPLACED