A Visit to Cabrespine in the South of France 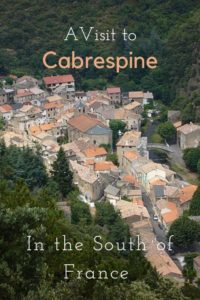 Visiting the South of France has been on my bucket list ever since I read Peter Mayle’s “A Year in Provence”.  Little did I know that my sister and her husband would move from South Africa to Cabrespine in France and I would be flying to visit them on the eve of my 62nd birthday.  We thought it would be a perfect opportunity for a family reunion and my brother and sister decided to fly over from England to join us.

My 85-year-old mother and I packed our suitcases and embarked on one of the longest and most tiring journeys we had ever undertaken. We departed from Cape Town International Airport and arrived in Istanbul 11 hours later. After a layover of eight hours, we took another three hour flight to Toulouse where my brother-in-law and sister picked us up.

I had seen many photos but nothing prepared me for what I experienced as we drove from the airport in Toulouse. On route I was immediately impressed by the flowers – huge fields of sunflowers and flower boxes in the streets of every little village we passed through. 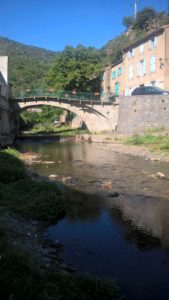 Cabrespine is a tiny village in the Minervois, home to about 150 inhabitants, and it swells to almost double the size during the summer months with seasonal visitors. The village nestles in the gorges of the river Clamoux that flows down from the Pic de Nore, the highest point of the Black Mountain (Montaigne Noir)

Eventually we were going up the narrow winding roads from Carcassonne to Cabrespine.  My sister and brother-in-law’s home is situated in a street right at the top of the village with most of the other houses lying in the valley below.

From the ancient walls outside, there was little indication of what to expect inside the home. On entering the blue front door with greenery hanging over it and plants surrounding it, we went through a welcoming entrance hall into a lovely dining area and up some stairs to a large bedroom. 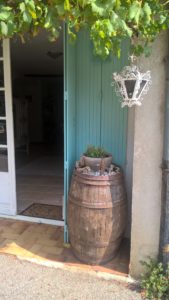 I immediately flung open the windows and took in the view of the forests across the valley.   I was exhausted after our travels and it didn’t take long before I collapsed and I only woke up at 11 o’clock the next morning.

After coffee, we took a quick walk along the narrow cobbled streets of the village, admiring the thick walls,  large, solid wooden doors and colorful shutters on all the buildings.

After that it was time to head off to the shops so that I could find a plug to connect to the internet. It’s fortunate that I am able to continue with my online writing wherever I go!

I was delighted to see boats lined up waiting at a lock on the Canal du Midi. People were riding bikes on a cycling track alongside the river.

Cabrespine is not far from Carcassonne which is famous for its huge, fortified, hilltop castle and this is where we decided to go for my birthday celebration. The view of the massive towers as we approached was an unforgettable sight. Once inside, I felt a little cheated by the contrast between what we had seen outside and the commercialism inside.   We had fun, though – eating pizza, drinking wine and people-watching. 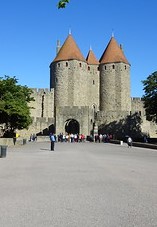 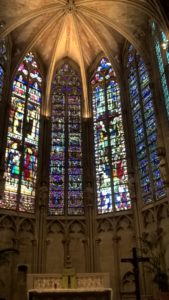 After browsing through the shops, we rested on benches at the Basilica, and admired the world famous stained glass windows.

I had been told that in August all the little villages have annual fairs and I was looking forward to attending one. On a walk around the village, I saw a noticeboard advertising a band called Angel.  My brother had arrived by then and we went down to the playground of the local school to see what was happening. It was a surreal experience to hear sixties music bouncing off the ancient walls and see people dancing with such abandon.  We may have missed out on the meules et frites (mussels and chips) but we drank some beer and soon threw aside our inhibitions and joined in, dancing late into the night. 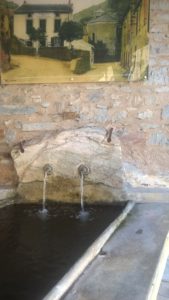 On a walk through the village, I came across what looked like a big bath and didn’t realize its significance until I attended a movie night and watched an old movie by Pierre Maguelon, a French actor who lived in Cabrespine. It revealed what life had been like in Cabrespine when the inhabitants lived off the land. In the movie,  the women of the village were seen gathered at the bath doing their washing.

Some lovely hiking trails start from the village. From my sister’s home you can see the Roc de l’Aigle, rock of the Eagle, and hiking  from the village takes you past the Gouffre de Giant or giant chasm of Cabrespine. We didn’t fit in a visit to the world famous caves this time but I will definitely do so on my next visit. 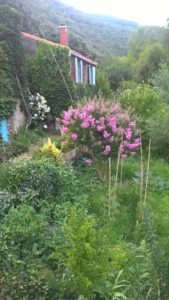 One of my favorite walks in Cabrespine was a short one along a forest road that leads to the hamlet of Laval. This is a little corner of paradise with its houses covered in foliage and a bridge over a river with many natural pools.

For wonderful swims in the hot weather, a lake in the village of Pradelle was our favorite swimming spot. It was a long, scenic, winding drive to reach Pradelle and that swim in the lake was quite spectacular.

The short drives around the Cabrespine area were as delightful as the destinations – steep, winding roads, forests and atmospheric mist lifting to reveal quaint buildings and lush vegetation. A longer drive up to the summit of the Pic de Nore gave us a magnificent panoramic view of the valleys below with the Pyrenees in the background.

When our time in Cabrespine was drawing to a close, we knew we couldn’t leave without a meal at the Caput Spina Restaurant. Its modern interior is unexpected considering its rustic surroundings and the quality of its food was excellent. Taha, the owner, and his partner, Melani, were very welcoming and helpful. Our choices for the night were written on a blackboard and I enjoyed my pork stirfry – a mouthwatering combination of textures and flavors.

As I was traveling on a budget, I couldn’t afford more than one meal out but I loved the simple fare we ate every day –  lovely chewy baguettes I couldn’t stop eating, a magnificent wheel of soft brie and some delicious salami bought at a stall at the Carcassonne market.

I was so grateful to be able to experience Cabrespine in a non-touristy way – meeting and chatting with people my sister had made friends with in the village. There is not a single shop in the village – an aspect many may consider a disadvantage but I enjoyed the absence of commercialism and the opportunity to identify with a way of life that has long disappeared in most places today.