One of the advantages of having an empty nest is being able to travel. Some people go for broke, selling their homes and traveling all over the world. Others, like me, are not able to go too far afield for financial and other reasons. However, this has not stopped me from making a list of short trip ideas.  I have been so busy for years that I have neglected exploring in my own backyard.  Recently I have been on some short weekend breaks only an hour or two away from home.

My first weekend trip away was to the West Coast National Park. My mother and I set off to see a phenomenon that occurs every year after the rains. Some of the desert areas burst into bloom and fields of orange, pink, purple, yellow and white flowers stretch as far as the eye can see.  The park has an area called the Postberg Flower Reserve that is only open to the public for a couple of months during the flowering season.

The park surrounds the Langebaan Lagoon and I drove 37 kilometers, catching glimpses of boats on the water, before reaching the Postberg. I negotiated my way slowly through a gate and up a steep hill, bumper-to-bumper with other vehicles. The careless extravagance and combinations of color immediately created the desire to grab a camera and capture as many images as possible for future reference. I tried taking a few photos but was unhappy with the quality. I will definitely have to buy a new camera. We drove past many people with impressive looking cameras, some of which were set up on tripods. At one point I stopped the car and wandered off into one of the fields to have a closer look. A ranger came running after me and informed me that I was not allowed off the road. I walked guiltily back to the car, realizing that rules were necessary if this spectacle was to be preserved for future generations.

We spotted buck grazing – Bontebok, Gemsbok and even a lone Kudu with its distinctive markings.  The buck seemed undet 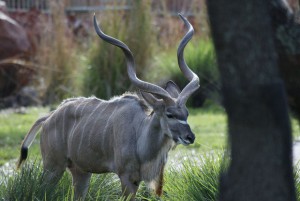 erred by the presence of humans and continued to graze peacefully in their colorful setting.  We turned left towards the Atlantic Ocean and the bright orange and deep purple blooms looked even more spectacular against the backdrop of the blue sea.

As we approached the exit, we came to an abrupt halt as another driver hit his breaks to let a long, smooth, black snake slither into the fynbos.  I vowed to return next year and my mother announced with satisfaction that she can cross another item off her bucket list.

My next trip was to the coastal town of Hermanus. Since 1992 the town has hosted an annual Whale Watchers Festival at the beginning of October. This event often attracts more than 100,000 visitors for the festivities and as we drove into the town, we realized that finding parking was going to be an issue. The arrival of the Southern Right Whales is cause for great celebration and the town bursts at its seams. The locals benefit greatly from the influx of tourists. All the restaurants do a brisk trade, accommodation is fully booked and huge marquees hold foods, wine, beer and all kinds of crafts. Sporting events, car shows and bands playing all kinds of music are just some of the attractions.

We managed to find seats a 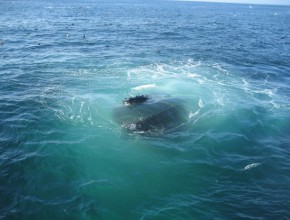 t a restaurant where we could see the water and sat drinking coffee and seeing whether we could spot a whale. It wasn’t long before I saw the flick of a tail. After coffee, we walked to the water’s edge to get a closer look. Sometimes you can see the whales only metres away from the shore, playing in the shallow waters. Sure enough, two of the massive creatures were lolling about in the bay. We could see huge humps in the water and occasionally the tails would flick up, making a huge splash as they came down. All of us watching collectively caught our breath as one of the whales breached, leaping right out of the water and falling back with a loud slap.

The reason the whales come here during winter and spring is to mate, calve and rear their young. I remember one occasion when we spent the whole afternoon watching a mother and baby playing in a protected bay. As we drove back home along the coast, we talked about how privileged we were to have seen these gentle giants once again. It is hard to describe the feeling you get when you watch whales – time seems to be of little importance, you are connected with the rhythm of nature and transported out of the confines of your every day life.