How an affair impacts a long-term marriage 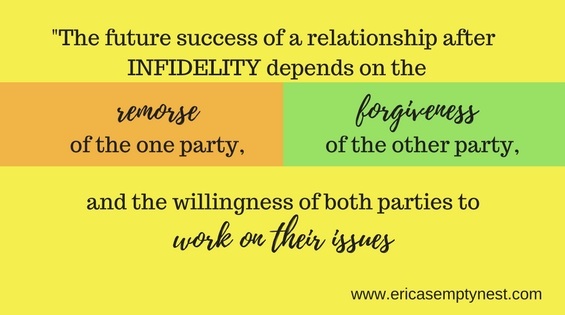 Erica August 15, 2017 0 Your relationships affair in a long-term marriage, an affair

An affair can be catastrophic to any relationship. When it happens in a long-term marriage, the consequences can be devastating. I had been married to my husband for decades but I was blind to the signs that he was having an affair.  I was so firmly in denial that I managed to ignore all the well-known signs of infidelity. In hindsight, the truth stood out like white chalk on a blackboard.

It’s rather like a subconscious conspiracy between the two of you. Neither of you want to precipitate a crisis, so the one lies and the other one lives in denial.

There is no formula when it comes to finding out whether your partner is cheating. But there are definitely clues and I believe that if you pick up on a number of them, it’s better to address the situation than living in a fake bubble that’s bound to burst. Hiding an affair is almost impossible for any length of time, even though a cheating partner can become a very good liar, adept at covering up the truth.

An affair brings into sharp focus any underlying issues in a marriage, particularly in your sex life.  After many years of marriage, sex can become the least important aspect of your life together and when this happens, it is easier for one partner or the other to fall prey to the excitement of an affair.

When my husband broke off with the woman with whom he was having the affair, she spitefully posted photos of them on social media.  One of my friends had the unenviable task of telling me the truth when she realized I had not seen them. At this point, I  would still have sworn blind that he was not involved with another woman. I did want an explanation from him because I knew something was wrong but I felt that if we could just sit and talk, we could sort out all our problems. This is the way we had approached our differences over the years. We had many confrontations that would end in a huge fight,  after which all was forgiven and the air was cleared.

As devastated and shocked as I was when I found out the truth, I also felt an element of relief. Finally, I wasn’t just dealing with suspicions and uncertainties anymore. I had concrete facts.  All the dots finally added up and I could make sense of what I had been feeling for months.

It’s never an easy conversation to have when you suspect your partner is being unfaithful – which is probably why many people avoid it.  A conversation about a possible affair can easily turn into an angry confrontation. If you are judgmental, your partner will inevitably become defensive and you will achieve nothing.

In our first encounter after I knew the truth, I was sure my husband would be sorry for what he did and I was prepared to try and save our marriage. I was completely blindsided when he told me he no longer loved me and he wanted his freedom.  I know that afterwards he regretted the defensive way in which he expressed himself but the words had been spoken and couldn’t be taken back.

The depth of the deception, the length of the affair, support systems available and religious beliefs are all factors that may determine whether people stay married after an affair. The decision to stay together rather than getting a divorce is never easy. The partner who has had the affair can’t just expect to carry on in the marriage as though nothing has changed.

An affair can be a wake up call – a realization for both of you that you have neglected your relationship. If you’re both committed to its restoration, couples counseling can make a difference. Once the veil of deception and lies has been ripped away, you may have a chance of experiencing true intimacy once again. You may even find that you start communicating better than you did before and are both more aware of maintaining the health of the relationship.

If you do decide to stay married, it does not help to stay for the wrong reasons. You can’t stay just because you are afraid of leaving and being on your own. You shouldn’t just stay married because it’s the safe option. It’s no good staying together if it’s done reluctantly as anger and resentment are likely to remain.

It is hard to think rationally when another person has come between you. Nothing can devastate you quite like being betrayed. Your irrational mind tends to take over and it can lead you into some crazy ‘acting out’. I have heard of women who destroyed all their husband’s clothing when they found out about an affair. Others give vent to their feelings by destroying cars and other expensive possessions.  Some turn their anger on the other woman.

Venting feelings and acting irrationally may feel great at first. You want to lash out and hurt your partner.  It’s perfectly understandable that you want him or her to feel the hurt you are feeling.  But if you give in to these intense feelings and allow them to control your behavior, you will probably regret it later.

Just being with the person who has betrayed you can be inflammatory at this stage. It’s better to keep some distance. When you have to communicate and find yourself ‘losing it’, rather make some excuse to terminate the conversation and continue with it when you are feeling more rational.

Broken trust is difficult to restore. It is a joint responsibility and you both need to be committed to the process. The person who has been deceived cannot give trust easily again – not after it has been abused. The deceiver has to be firmly committed to re-establishing trust once again, no matter what it takes. The one who has been deceived will take time to reach a point where trust is possible once again – it does not just happen without being reinforced by continued and consistent effort.

I knew that I would be able to forgive my ex for the affair. What I did not know was how I would deal with the fact that he had lied to me consistently. I believed our marriage was based on trust, friendship and mutual respect. This illusion had been destroyed. How would I ever know when he was being truthful if he had managed to lie to me so successfully for so long? I couldn’t imagine a life where I questioned his every move and kept looking for signs that he was being unfaithful again. Even if your partner submits to close scrutiny for a while after an affair, it does not build trust. I know someone who took her husband back after an affair and then proceeded to drive herself crazy by checking his cell phone constantly, screening his emails and trying to keep tabs on him at all times.

Trust is all about believing the other person unreservedly, without the need to check on him/her constantly.  When trust has been broken, building it again is a slow and challenging process. You have to be able to see evidence of change. If you start trusting again without any basis for it, you are highly likely to be disappointed.

Wallowing in the details

I desperately wanted to know all the details of the affair and I believe this is a common response to infidelity. I felt that just for starters I needed to know where he had met her, how long it had lasted and what he had told her about us.  You somehow imagine that if you just had all the little details, you would be able to make sense of what happened. I discovered it does not work that way.  Even if you know the ‘where’, ‘when’ and ‘how’, it does not change what happened. You really don’t need to know more than that he/she betrayed you.

My ex was extremely reluctant to tell me anything. It’s hard to admit this but I hunted on Facebook until I found the woman’s profile and scrutinized her posts carefully for clues. I never saw the photos she posted after he dumped her because they were taken down quite quickly but she had left a vitriolic post tearing my my husband apart and accusing him of being a liar. I must say I did get some satisfaction out of seeing that he had lied to her too. A number of my friends had seen the photos and they all had their own opinions about the situation. My obsessive search for details did yield some answers but it made me feel as though I had sacrificed my dignity.

Many couples underestimate how intertwined they have become over time. They have shared responsibilities and made many adaptations to living together. They have a shared history with countless memories. An affair introduces another person into the equation and the marriage is never the same again. It can be better, if both parties are willing to address what happened, why it happened and they are both willing to work on restoring their relationship.

Those who want a divorce to be with a new partner are often focused on all the flaws in the marriage. They think that being with a new partner will help them achieve the happiness they are missing in their current relationship.  But they may be taken aback by the emotions they experience even when they are with a new partner.  They cannot simply pretend that the long-term partner never existed, no matter how hard they try. The new relationship is likely to have its own problems too.

I believe in marriage and that you should do all you can to make it work, especially if you have been married for many years. But you cannot do it on your own. Both parties have to be committed to the marriage for it to survive the impact of an affair.