A behind-the-scenes look at making a gallery wall

I have not been entirely honest about my attempts at making a gallery wall and I have decided to come clean. Here is a behind-the-scenes look at what really happened:

Bright idea number 1 – I decided not to use nails. I had read about how people use double-sided tape to hang their images. Wikihow even has a post where they show you exactly how to do this and I am sure that if you pay attention to the details, including the weight suggestions, you will be successful. I thought about all the nail holes in my walls and decided tape was a brilliant idea. I bought the toughest, thickest double-sided tape I could find.
Bright idea number 2 – I thought I would save time and effort by taking a huge piece of plastic, draping it over the pictures I had already arranged on the floor and taping it down on both sides. I would avoid cutting out a whole lot of separate pieces.

A great tip! I wish I had found the following tip before I started – take a large piece of butcher paper, arrange the pictures on top of it and trace round the frames. Remove the frames, mark how far down the nails should be and then tape the paper to the wall. Hammer the nails in through the paper, take it down and hang the frames – no measuring, no pencil marks and perfect results. Brilliant!  I will definitely try this one if I ever have the guts to attempt a gallery wall again because my version did not work at all. The plastic kept coming loose as I battled to make the cuts.

Ignoring advice
My pictures stayed on the floor for a while as my son tried to convince me not to use the tape. He said he would help me to put up the pictures but he works long hours and I knew I would have to wait for a while. I couldn’t stand the fact that my precious pictures had taken up residence on the floor with everyone having to cautiously skirt around them. Patience not being a virtue I am known for, I ignored his advice, put tape on four corners of each picture and stuck them up on the wall. My pictures were all finally up and it didn’t look too bad!  I was feeling quite proud of myself. 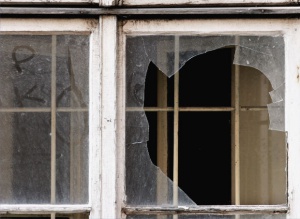 An attempted burglary?
Later that night, I was lying in bed when I heard a loud crash and the sound of glass breaking. I have had a number of burglaries recently and so I shot out of bed. Fortunately, my son and daughter were both at home and they too were both woken by the noise.

We crept cautiously through each room brandishing various weapons. We grew more and more puzzled as none of the windows appeared to be broken. I was about to contact our neighborhood watch when I glanced at my gallery wall. I did a double-take as I suddenly noticed a huge empty space where I had hung the clock. Looking behind the couch, we found pieces of glass and the remains of my clock.  The next morning I knocked in my first nail.

The force of gravity takes its toll
Since then, the heavier pictures have succumbed one by one to the pull of gravity. No sooner did I knock in a nail and replace one, than I saw another one creeping downwards. The trouble is that each time one started moving downwards, it pulled part of the cretestone with it. My son had threatened dire consequences and now he took great pleasure in saying “I told you so!” When my daughter pointed out that I had completely ignored his advice, I had a tantrum. I knew they were justified in what they were saying but instead of maturely agreeing with them, I started picking up pieces of plaster and flinging them around the room.  I stormed into my bedroom and slammed the door, only emerging several hours later once I had finally calmed down.

The final result
I do not have a professional looking gallery wall. I have a patchwork of cracks, photos and disintegrating plaster instead. I will have to replace the cretestone and repaint the wall.

Lessons learned
My first lesson is that my son may be wiser than I give him credit for. The second lesson seared into my brain now is that using the right tools and products is essential when attempting any DIY. These command strips would have been a good choice for my lighter pictures. I didn’t really take the size and weight of the pieces into consideration. I learned the hard way that mounting your heavier pieces in the wrong way will inevitably lead to you waking up at night to the sound of your artwork crashing to the floor.

Another lesson I should have learned is to stay away from DIY. Unfortunately, I absolutely love DIY despite a few disastrous attempts (I must write a post about my attempts to get the varnish off my diningroom table!). I am already dreaming about what color to paint the wall.