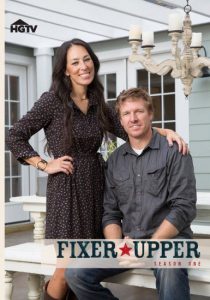 I have watched many a fixer upper TV show over the years but HGTV’s show,  Fixer Upper, hosted by Chip and Joanna Gaines is one of my favorites. This down-to-earth couple lives in Waco, Texas with their four children, Drake, Ella Rose, Duke and Emmie Kay. Drake, the oldest, is six and Emmie Kay, the youngest is only two. They manage to juggle their business of renovating houses and caring for their four young children with apparent ease.

Chip and Joanna have been married for 10 years and despite their busy life, still seem to have that romantic spark in their marriage. They work well together as a team and Joanna admits to being the one who worries, while Chip likes to take risks. She has big dreams and he always encourages her to pursue them.

Joanna is not a trained designer but has developed her own sense of style through the years.  Chip is the construction pro on the show. His boyish sense of humor irritated me a little in the beginning but he grew on me, particularly when I saw the way he treated Joanna.  As a boy, Chip wanted to be a baseball player or a politician.  Joanna dreamed of being a broadcast journalist but did not think her career would develop in the area of design or renovation.

How did they get started?

Chip and Joanna Gaines both graduated from Baylor and Joanna opened Magnolia Market after their marriage in 2003. It is in this store that she honed her design style. Chip worked in real estate and bought, renovated and sold homes. When the children came along, Joanna began doing design work from home. She also blogged and a friend of hers posted pictures from her design blog on ‘designmom.com’. This was followed by a story that was seen by a member of the show’s production company. A show that has captured the hearts of millions of viewers was born.

Chip and Joanna began renovating homes long before the TV show and the farmhouse they live in now is an example of their style. The 1,700-square-foot Victorian home is their ninth home and is located on 40 acres where the children can run around and have fun playing with the goats, chickens and other animals. They bought this home in 2012 and, of course, it was a fixer upper.

What is it that attracts people and hooks them? 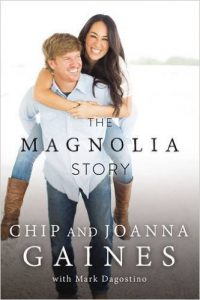 Some of the other home improvement shows I watched used to create fake drama between the presenting couples. I was tired of this formula. The banter between Chip and Joanna comes across as completely natural and unforced. Their genuine affection for one another is clearly visible.  Sometimes, I watch really closely to see if I can pick up a fake note as it all just seems far too good to be true. Yet, I also find myself totally entranced at the same time by how adorable they are together and how they manage to avoid coming across as cheesy.

I think what fascinates viewers is that they are two ordinary people and yet they seem to live this enchanted lifestyle. They have a great marriage, four wonderful children and a lovely home on a farm. And yet, they also manage a very successful business, working hard and doing what they love.The show itself is fascinating to watch. Who doesn’t love seeing a transformation – an ugly duckling of a house changing into a beautiful swan!

Chip and Joanna’s first book, The Magnolia Story,  can now be purchased on Amazon (click on image).  It offers those intriguing details we all want to know – their first renovation project, their ups and downs as an entrepreneurial couple, a project that nearly cost them everything, the significance of the name ‘Magnolia’ and a breakthrough moment when Joanna discovers the secret to creating a beautiful home.

What I personally love about the show

I love the fact that when the buyers are presented with a choice of three different houses, they inevitably choose the one that needs the most work. They seem prepared to take a risk and give Joanna a chance to show  what she can do. Sometimes I look at their selection in horror and wonder whether Chip and Joanna are really going to be able to pull this one out of the bag.

I love the way Joanna re-purposes items. She never seems to look at objects in the same way as anyone else. She will hang a bicycle, a windmill or an old sign on a wall and it will look exactly as though it was always meant to be there.  In her own farmhouse, her kitchen island used to be a communion table in an old church. 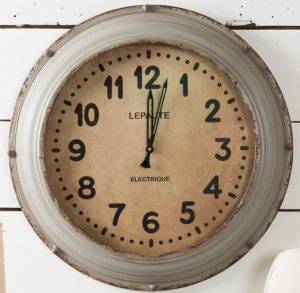 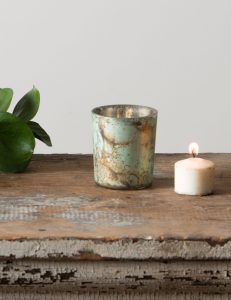 The way she decorates homes is simple and celebrates family. She does not specialize in perfect interiors where no-one would feel comfortable.  Her interiors are livable, warm and inviting. The look is ‘cozy’ and yet harmoniously elegant at the same time. She loves huge clocks, old maps, old books and shiplap. If you don’t know what shiplap is, you will soon find out when you watch the show – don’t worry,  I didn’t know what it was before I watched the show either.

Joanna seems to love open plan living as much as I do. She is always getting Chip to rip down walls – which he does with great gusto! I enjoy the way she places the furniture within the open plan space to give each area definition. She manages to maximize the space and make it as functional as possible.

I love that moment when Chip and Joanna slide away the image of the ugly old house and the couple see their new home for the first time. Their jaws drop and they can’t stop exclaiming over every little detail. We see all those details with them and marvel over the transformation.

I enjoy watching the whole family interact. On the last night before the couple sees their home, Joanna will spend time alone putting together the final touches. Chip usually supplies some pizza and brings their children along for a short visit.

Joanna loves the ‘distressed and antique’ look. I love it too but not quite as much as she does.  However, she does manages to combine the furniture in such a way that it does not seem overdone. I also saw her dial her personal preference back when a client voiced his dislike of the ‘distressed look’ and she created a look that he loved.  I can easily imagine myself living in every single home they have featured.

I love the paint colors she uses and I am delighted to learn that she has created her own paint range with names  like ‘Shiplap’, ‘Magnolia Green’, ‘Emmie’s Room’ and ‘Weathered Windmill’.  She said “Every color is inspired by someone or something important to me – from Chip’s wedding band to our farm animals — each color has a unique and personal story.”

When I think about Joanna’s style the two words that come to mind are ‘accessible’ and ‘personal’. She often includes possessions the owner already has and loves browsing through flea markets for ‘treasures’.  She budgets carefully when she buys and makes us all want to rush out to the nearest flea market and find items we can repurpose for our own homes.

What about the future?

This couple has managed to inspire so many people. They seem to have it all and yet through it all they appear to remain approachable and humble. One of their latest projects is Magnolia Market at the Silos, where people can shop, play games and eat. The property is in downtown Waco and Magnolia Market now occupies the barn on the property.  On a lawn at the center of the property is a big box full of games that can be enjoyed by friends and families.  A garden has flowerbeds with seasonal flowers and plants, a wooden teepee for children to play under and books for them to read. Joanna is continuing to fulfill her dreams one step at a time, with Chip supporting her all the way. In Joanna’s own words “It’s truly only because a fiercely faithful, brave and bold husband pushed me to pursue my dream that it ever came to be.”

You can purchase all three seasons of Fixer Upper as DVDs on Amazon. It is also possible to buy individual episodes – perhaps you have already seen the series and were so impressed by the renovation of one particular home that you would like to own that episode. I want all three so that I can spend a weekend snuggled up on my coach and binge-watch them all over again.