My father and his journey of faith

Erica July 5, 2016 0 Your spirit a man of faith, a man without guile, an honest man, my father and his journey of faith 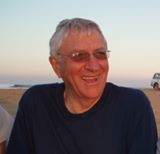 Nothing prepares you for the sense of loss you feel when a parent dies. I was devastated when my father, Ryall John Erfmann,  died unexpectedly of a heart attack at the age of 77. My parents were on their way to have afternoon tea with my sister when they were forced out of their car by men with guns. The men drove off and they ran up the driveway to my sister’s house. My father’s heart could not cope with the shock and he collapsed and died later that evening in hospital.

As a family we couldn’t believe that he had been taken away from us so abruptly.  It was some consolation to know what a strong relationship he had with God. He would have told us to trust God and believe that “God causes all things to work together for good to those who love God, to those who are called according to his purpose” (Romans 8:28).

My dad always had a very strong work ethic. He qualified as a Chartered Accountant and worked long hours to establish his career. He was also the type of person who was often elected to positions of responsibility and his duties meant that he was not often around.

My mother tells the story of the evening when she had just come home after giving birth to my youngest sister, her fourth child, and he was out giving a speech. She was not coping and phoned the venue, telling the person who answered the phone to interrupt his speech and tell him to come home or there would be dire consequences.

Even in the latter years when he worked from home, he would disappear into his office for hours and appear briefly for meals. After I married and moved 1000km away, I only saw my parents once or twice a year. On one occasion when I was visiting I was really upset that dad had not spent time with me.  I confronted him and told him that his work mattered more to him than I did. The tears rolled down his cheeks and he said that he was sorry.  We became very close after that and he treated me with great tenderness, calling me special names when we spoke on the phone.

One of my early memories is of dad trying to shepherd all four reluctant children into his bedroom for family prayers. He was usually so frazzled by the time he had us all perched on his bed that I think the prayers suffered but I am sure these times brought us closer as a family.  We also had to attend Sunday School every Sunday without fail – he was the Sunday School Superintendent so his children had to set an example.

A leap of faith

When I had already left home, dad felt God calling him to give up his partnership in a very prestigious accounting firm and move across the country. He took a great leap of faith, made the move, and opened up his own practice. It took him a while to build up a clientele but his work ethic and integrity stood him in good stead. He gained some very loyal clients who stayed with him for many years. It was a time of fruitfulness for him spiritually as well, as he grew in his relationship with God and his ministry to others.

Dishonesty is a slippery slope

I always knew that I could trust my dad implicitly – he was honest to a fault. As I matured, I began to understand just how honest he was and how high his standards were for himself and others.  Once he violated his own standards when he trespassed and fished in a dam without paying the small fee. He had no peace until he had written a letter of apology to the authorities and enclosed the fee. He was a strong believer that honesty in even the smallest matters was important.  Little acts of dishonesty were a slippery slope towards becoming dishonest to the core.

Dad was a man of deep faith. He was always sensitive to what he felt God was telling him and obeyed Him, even when it meant practicing ‘tough love’.  As his children, we all knew that God came first in his life and sometimes that made life difficult for us. I was offered ‘free’ contact lenses at one time when I had damaged mine – my dad would not let me accept them because the optician was going to lie for me to the medical aid.  My sister faced a crisis when he refused to loan her any more money.  He said she had to learn to rely on God as her provider and not on him. Her distress turned to joy as God provided miraculously for her family.  We always knew my dad loved us deeply but sometimes it was not easy being his child.

When I went to university, I was exposed to many new ideas and began developing my own beliefs that sometimes conflicted with those of my dad. He believed firmly in duty – duty to God and to family members. I began to question the validity of actions motivated by duty rather than love and started to resist his attempts to tell me what to do.  I was a know-it-all at that point in my life and we frequently butted heads. My brother and younger sister also had many differences of opinion with him over the years. However, despite our arguments, he was always there for us. He was an anchor in my life, providing me with a strong sense of security.  When I was heartbroken after a relationship ended, I felt his deep concern and support. I knew I could always turn to him for wise advice, even if what he said did not always suit me. I miss his wisdom so much now that he’s gone.

His loyal clients remained with him even when his eye sight began failing.  He eventually began using a magnifying glass to help him read.  Not long before his death, his eyesight had deteriorated to the extent that he made a significant mistake on a client’s tax return. He informed the client that the tax man owed him a fairly large sum of money and on the strength of this, the client booked a holiday. When my dad realized he had made a mistake, he paid for the client’s holiday.

A knack for bad investments

He truly was a man ‘without guile’ and although this is why many people loved and trusted him, it also made him gullible. He could never quite grasp just how unscrupulous other people could be. He was persuaded to invest in a series of shaky business ventures over the years, losing a significant amount of money in the process. We could never believe that he was so good at dealing with other people’s money but so bad at investing his own. One of his last investments was in a restaurant that all of us knew was doomed to fail. My brother used to say “do exactly the opposite of what dad does when it comes to investments and you can’t go wrong.”

At my dad’s memorial service, attended by hundreds of people, person after person stood up and spoke about how much he had meant to them. Incidentally, another of his little weaknesses came out at the same time – his sweet tooth. It appeared he was well known for his appreciation of the cakes and other treats offered to him when he visited people. He was clearly ‘deprived’ as my mom did not eat sweet stuff and never felt the need to keep it in the house.

One of my fondest childhood memories is also about sweets. Dad developed the habit of coming home from work on a Friday with packets of sweets and hiding them in his clothes cupboard.  It wasn’t long before we all knew where he hid his peppermints, peanuts and chocolate clusters.   He always complained when they disappeared but he never changed his hiding place!

A year or two before he passed away, my dad felt driven to write a book. He wanted to write down in simple form some of spiritual principles that had guided his life.  He was a teacher at heart, always able to convey difficult concepts in simple terms to others. He felt that such a book would be valuable for new believers. He began the process of compiling his book, topic by topic, and completed The Way Forward not long before he died.